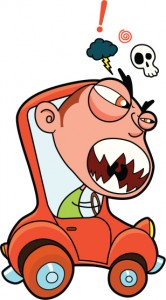 What do you do with these drivers? Avoid them, if you can. You should also be aware of the risks that they do present so that you can anticipate what you might face when you run into one.

According to the NHTSA, 60 percent of drivers that they surveyed for a study said that they feel that unsafe driving is a threat to them and their families. This is not too surprising. The NHTSA identifies some specific problems with aggressive drivers that good drivers should be aware of. For instance:

All of this boils down to a portrait of a driver who is angry, a poor driver, who doesn’t really care about the welfare of other drivers and who takes risks, a habit which may be exacerbated by their frustration. These drivers pose risks that are too numerous to name one by one, but here are some of them.

Aggressive drivers will ride your bumper, driving too fast and sometimes end up colliding with the vehicles in front of them.

Aggressive drivers are typically angry, frustrated individuals who may react with anger if they are involved in a crash, even if they caused it. Be wary of this if you’re in a wreck with one.

Dealing with the Threat

Don’t retaliate. The best way to deal with aggressive drivers is to just let them go by and get out of their way. They can’t hurt you if you’re not near their vehicle. Aggressive driving is negligent. If you’re harmed by an aggressive driver, contact a car accident lawyer about filing a lawsuit to get compensation. No matter how much of a rush they were in or how good a driver they thought they were, aggressive drivers are responsible when they harm other motorists.