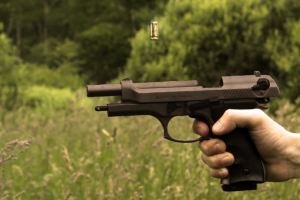 Illegal possession of a gun comes with stiff penalties that can put you in quite a predicament. Depending upon where you live, the gun laws you have to adhere to vary as well as what penalties you face for illegal gun possession. While a defense attorney can help you when you are facing an illegal gun charge, you should know the laws for your state.

You may be required by your state to have a permit, license, or certification to hold and own a gun. Despite the right to bear arms as outlined in the 2nd Amendment, gun rights are not inclusive and can be taken away by the laws that govern the state that you live in.

As many as 13 states do require some kind of permit or license to purchase and own a gun. The penalties for failing to procure these permits or certificates vary by state, but in most instances, include fines as well as jail time.

If you have a felony charge on your record, you may not own a gun according to federal and state laws. If you were to have possession of a gun with a felony charge, you may be charged with a misdemeanor or another felony charge. Felons that have an illegal gun possession charge against them, typically face higher penalties than others that possess a gun illegally.

If you had a felony on your record and were charged with a crime in addition to an illegal gun charge, you would face severe penalties. Not only would you be sentenced for the crime committed, but in most states, you would also face an illegal gun possession charge which could double your time behind bars.

Some states do require that a minor carry a permit or license for gun purchase or ownership with penalties varying for each offense. However, minors, depending on the state where you live, are able to possess a gun for hunting or with their parents’ permission. It just matters where you live and where you state allows these exceptions to their gun possession laws.

No matter if you are minor, a felon, or a person with a mental illness that has been charged with illegal gun possession, a criminal defense lawyer can help. They will develop a defense that can help to keep your gun charges out of federal court. They will argue against the evidence that has been presented against you and challenge the search and seizure that led to your illegal gun charge arrest.

A criminal defense attorney can help to minimize your sentencing. This can prevent a lengthy jail or prison sentence as well as ensure you to do not receive a felony charge for your illegal gun possession. Illegal gun possession is a criminal offense that needs the legal guidance of a criminal defense lawyer that will fight for your legal rights and provide you the best outcome in your case.

Liz S. Coyle is the Director of Client Services for JacksonWhite Attorneys at Law. She also serves as a paralegal for the Family Law Department. She is responsible for internal and external communications for the firm.

Latest posts by FamilyBlawg (see all)

FamilyBlawg: Welcome to family law 2.0 View all posts by FamilyBlawg