If you are married, but separated and living in separate households, the income of your non-filing spouse will not be taken into consideration for the means test. However, if you are married, then your spouse’s income will be taken into consideration for the means test.  This could have a significant impact on the filing spouses’ Chapter 7 petition.  If the non-filing spouse’s income is too high, then you may not qualify for a Chapter 7 bankruptcy.  In this is so then the “marital adjustment deduction” may help.

As part of the means test, you are permitted to deduct expenses from your income.  The “Marital Adjustment Deduction” allows you to deduct any expenses that your spouse pays that are not normal household expenses.  These “other” expenses are known as “marital deduction expenses.”  Examples of marital deduction expenses can include credit card payments for accounts that are only in your spouses’ name, child support payment for your spouse’s child, business expenses, student loan payments, and payroll deductions.  The net result of using the marital adjustment deduction is that if significant, it may offset at least some of your spouse’s income that you had to include in the means test.  Thus, you may still be able to qualify for a Chapter 7 bankruptcy even though your spouse’s income is relatively high.

If after applying the marital adjustment deduction you still do not qualify for a Chapter 7 bankruptcy, you may be permitted to file under Chapter 13. While all of your debt will not be discharged, the total amount you repay your creditors will likely be significantly reduced and you will have 3-5 years to make the payments.   However, you will still have to disclose your spouse’s income and expenses, which may affect the total amount you have to repay your creditors.

The importance of Full Disclosure

Ultimately, both your complete financial picture and that of your spouse will likely be closely reviewed by the bankruptcy court to determine how the law will allow you to proceed with your bankruptcy.  Thus, it is important to be prepared with evidence backing up all claims regarding income and expenses, or risk having your case dismissed.  An even worse result would be having the bankruptcy court determine that you have committed or attempted to commit fraud.

Do you think it is fair that a non-filing spouse’s finances are considered when a married person files for bankruptcy?  What if throughout the marriage the couple’s finances remained largely separate?  Does this rule encourage spouses to legally separate or “pretend” to separate? 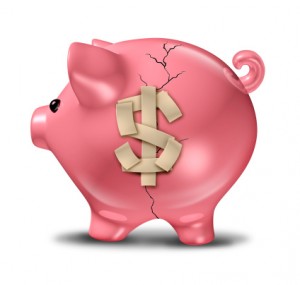 Believe it or not, people who go bankrupt do enjoy some advantages. Bankruptcy, in fact, exists so that people who make a mistake financially don’t have their entire life ruined for the rest of their existence. It gives people an opportunity to get a fresh start, to do things right and, after the bankruptcy has gotten off of their credit report, to start rebuilding their credit without having to repair a tremendous amount of damage that they may have caused in their youth. There are disadvantages to going bankrupt, as well, and you want to take these into account if you’re considering filing for bankruptcy.

If you are considering filing bankruptcy, it’s likely that your phone is ringing off the hook with collection agents trying to get money out of you. One of the advantages of filing for bankruptcy is that you get a stay order against those collectors. Until your bankruptcy is resolved, those collectors cannot bother you about the bills you have with them without contacting the court first.

While this may seem like a small benefit from the outside, it is a huge benefit. It allows you to get time to consider your situation, to put together your bankruptcy claim and to not be constantly stressed by people who are reminding you incessantly of debt about which you are already well aware.

There are accommodations that allow people to stay in their homes if they declare bankruptcy. This can allow you time to get back in the good graces of your mortgage holder and ensure that you don’t end up out on the street. For some families, this is absolutely the best move possible.

There are basically two types of bankruptcy that individuals can file for: Chapter 7 and Chapter 13. In a Chapter 7 bankruptcy, all of the existing debt that you have is liquidated, except for those debts that are guaranteed. Student loans, for instance, do not go away. In a Chapter 13 bankruptcy, you still pay off your debts, but you pay them off through the courts at a rate that is affordable for you.

The disadvantage to both of these types of bankruptcy is that they do stay on your credit report. It can make it much more difficult for you to get lending and, in some cases, to even get an apartment. Compared to having your wages garnished to pay back credit cards with ridiculous interest rates or other unsecured debts, however, bankruptcy may actually be preferable.

Talking to an attorney who handles bankruptcy law is the best way to determine whether or not it’s time for you to go ahead and file bankruptcy.