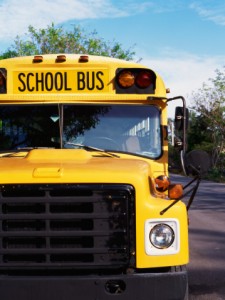 According to an in-depth research study conducted in 2008, the National Highway Traffic Safety Administration estimates that approximately 142 people die every year due to an accident involving a school bus or other vehicle used as a school bus. Of these reported casualties, 72 percent were drivers or passengers in vehicles other than the school bus involved in the accident. The remaining percentage of victims are primarily school-aged children, drivers and bus monitors, with nearly half of killed children falling within the five- to seven-year-old range.

What are the Causes of School Bus Accidents?

While the reasons behind school bus accidents and their resulting injuries, death and damage vary from case to case, there are a few very common causes that have been observed since buses took over as the primary mode of transportation for school-aged children.

Approximately 17,000 children are hospitalized or treated in an emergency facility every year due to an injury sustained while on or near a school bus. Replacement of out-of-date vehicles and accessories can help bring this number down significantly, allowing school children, their families and school administration officials to feel more confident in the transportation system that millions of people rely upon every day. If your family has been negatively affected by an accident directly related to school bus use or malfunction, you may be entitled to legal and financial recourse. An experienced personal injury attorney will assess your case and determine the most effective course of action to obtain compensation.